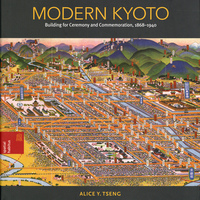 What defines modern Kyoto apart from its earlier history? This lecture focuses on three phases, or three identities, of Kyoto from the past 150 years. The departure of the reigning emperor for Tokyo in 1868 was the first pivot point, destabilizing Kyoto’s longtime status as an imperial city. The loss of the emperor in residence paradoxically galvanized initiatives to tighten connections to the imperial lineage, securing a unique place for Kyoto as a key center for imperial veneration and patriotism. Japan’s defeat in the Asia-Pacific War in 1945 posed a new challenge for Kyoto. Pivoting away from emperor- and empire-boosterism, the city aspired to join the postwar network of interconnected international cultural and artistic movements. Signature urban construction projects broadcasted world-class budgets, styles, and looks. The burst of the bubble economy at the start of the 1990s set Kyoto in a new direction that privileged preservation (or the assertion of preservation) of its pre-modern heritage. In line with UNESCO’s definition of World Heritage Cities as sites of outstanding cultural and historical value to humanity, Kyoto expands its role in the 21st century to engage the world at large. Conservation, renovation, and even replication of historical architecture have increased pace, yet so have the arrival of global commercial brands and storefronts.