Explore student projects. Click on the course title to expand each section.

Explore the digital media project, Baseball in Meiji Japan, by Eli Bailit, created as a final project for HIST 5.05/ASCL 64.11, The Emergence of Modern Japan, taught by Professor Ericson in Fall 2022.

Explore the collection of digital exhibits created by the students in Culture and Identity in Modern Mexico with Professor Bryan Winston. Visit the exhibition here.

Digital Exhibition: The Kitchen in the Cabinet 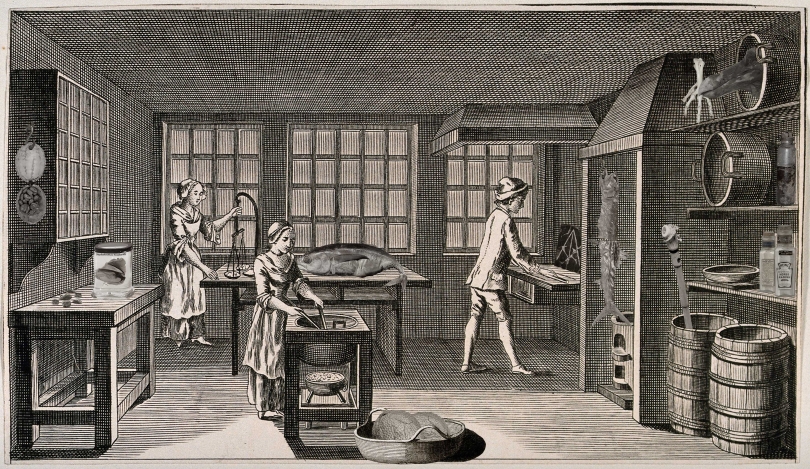 In Fall 2021, Whitney Barlow Robles, a Postdoctoral Fellow in the Department of History and Society of Fellows, launched a digital exhibition titled The Kitchen in the Cabinet: Histories of Food and Science. The exhibition is the product of a collaboration among Robles, Australian graphic designer Katie Dean, and three Dartmouth undergraduate students—Fatema Begum, Lauren Dorsey, and C.C. Lucas.

The Kitchen in the Cabinet investigates the intimate ties among food, natural science, imperialism, and slavery in the early modern period through the stories of centuries-old food artifacts. Despite their perishable nature, these objects survived to the present by being preserved in scientific collections such as natural history museums. During the pandemic, the team set out on armchair expeditions, virtually mining the websites of museums from across the globe and reaching out to curators in pursuit of food artifacts that had survived against the odds. Some of the items they found include a specimen of breadfruit, intended to cheaply provision enslaved individuals in the eighteenth-century Caribbean; a block of dehydrated "portable soup," the likes of which fed sailors and helped stave off scurvy on circumnavigations of the globe; and burnt fragments of persimmon seeds from George Washington's Mount Vernon estate, one of the few foods on the plantation to be eaten by both the enslavers and the enslaved.

The website is best explored from a laptop or desktop computer, which allows users to engage with an interactive homepage designed by Dean and coded by Dorsey. When visitors arrive at the site, they are greeted with a scene based on an etching and engraving from Denis Diderot and Jean-Baptiste le Rond d'Alembert's famed Encyclopédie, a major contribution to Enlightenment print culture that, in the process of striving to catalogue all human knowledge, visualized the worlds of craftspeople. Dean populated the print with the exhibition's featured objects, drawing attention to their latent food and craft nature. By hovering their cursor over individual objects, visitors can read short synopses and click through to each object's full story. The image on each individual artifact's page has a rollover function, likewise activated by one's cursor, that draws attention to the instability of the object's categorization as a scientific specimen rather than a food object.

While the exhibition targets specialists in food studies and the history of science, it also engages a number of contemporary issues, ranging from the continued exploitation and cruel labor conditions in today's food industry—as described, for example, in Begum's feature on Ernest Hemingway's tuna specimen—to the effects of climate change on archives of food, as probed by Dorsey in her feature on a bottle of horseradish preserved by Antarctica's snow and ice. 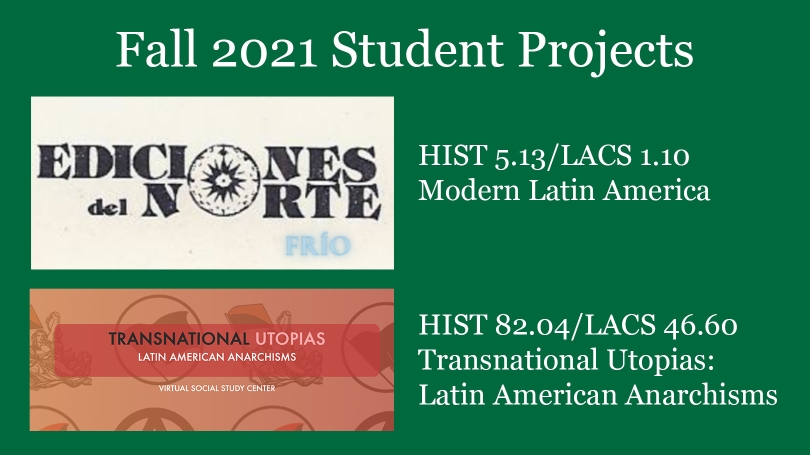 Read Professor Meléndez-Badillo's description of the class projects below:

The Covid-19 pandemic has impacted our lives in multiple ways. Teaching online during the lockdown forced me to reconceptualize my pedagogies. It gave me a space to experiment with digital humanities in ways I had not done so in the past. Each class had at least one digital humanities assignment, from a Twitter account to interactive maps and timelines. These exercises allowed students to work collaboratively and to challenge their preconceived notions of what constitutes legitimate forms of knowledge production. The success of these assignments in garnering student interest convinced me to continue experimenting with digital humanities when we went back to the classroom.

In my Modern Latin America course, which took place in Fall '21, students collectively created a podcast titled "Ediciones del Norte Frío." The name was a tribute to a publishing house that operated out of Hanover, NH, and published key texts in the world of Latin American letters in the 1980s and 1990s. The podcast was the culmination of students' collaborative work throughout the term. Influenced by pandemic life, I divided the 35-student class into seven pods during the course's first week. This structure guided the assignments and classroom discussions. I would often pose a few questions for students to discuss in their pods, later coming together and sharing impressions. By the second half of the term, students commented that they felt a sense of community in each one of the pods. The assignments were also structured in a way that allowed students to build on the topic they would research in their final project. Towards the end of the term, each pod brainstormed ways that their individual topics intersected to give each podcast episode cohesion. Ultimately, students created a podcast in which they researched, wrote, and produced all the episodes.

In the Transnational Utopias: Latin American Anarchisms class, students created a sense of community organically. This was facilitated by the class size; 11 students. Throughout the term, students engaged with the ways that anarchists, workers, and intellectuals built global networks of information and alternative pedagogical projects. One of the projects that we paid particular attention to in class were "Social Study Centers." While we originally wanted to occupy a space on campus to build a physical infrastructure for the class' final project, we decided on creating a virtual center. The website served two different roles in terms of class assignments. Students conducted research and produced a final paper but instead of using the traditional format, each one of them produced a 'zine. Short for magazines, zines are an important element in countercultural knowledge production. They are also part of an abolitionist pedagogy. While the zines were the virtual center's core, we also divided the class into smaller pods that generated additional educational content for the website. The final product included an interactive map, media gallery, resources, and micro-syllabi.

These assignments allowed students' learning experience beyond the classroom while fostering a sense of community and experimenting with different forms of knowledge production.

HIST 5.05: The Emergence of Modern Japan 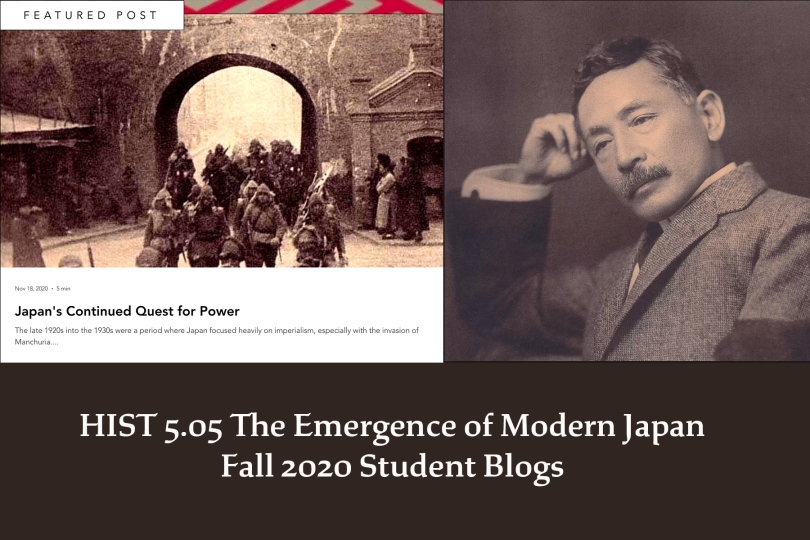 History 5.05, The Emergence of Modern Japan, taught by Professor Steven Ericson, is a survey of Japanese history from the mid-nineteenth century to the present. Topics include the building of a modern state and the growth of political opposition, industrialization and its social consequences, the rise and fall of the Japanese colonial empire, and the postwar economic 'miracle.' In Fall 2020, several students created digital media projects from their research.

Visit the collection of digital exhibits curated by students in The Dartmouth Vietnam Project: Learning Oral History in a Digital Age in Fall 2020.

Visit the collection of digital exhibits curated by students in The Dartmouth Vietnam Project: Learning Oral History in a Digital Age in Winter 2020.