Living with the Dead: Urbanism in the Roman Suburb 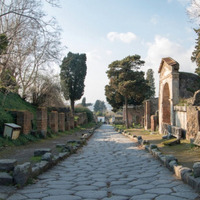 Living with the Dead: Urbanism in the Roman Suburb

The Roman city was a bounded space, surrounded by barriers both physical and conceptual. Fortification walls, natural features, the edges of orthogonal grids, and religious borders like the pomerium all worked together to distinguish the urban from the non-urban, to define the city versus everything beyond it. The dead made up one of the primary groups regulated by such boundaries. From the codification of Rome's earliest law code, the Twelve Tables, in the fifth c. BCE, the dead were banned from the city proper and their tombs restricted to the zone outside it. Nevertheless, from the first century BCE Roman cities across the Italian peninsula began to develop suburbs, densely urbanized neighborhoods located beyond their traditional urban boundaries. Here, houses and shops, workshops and sanctuaries, rubbish dumps and major public buildings jostled cheek-to-jowl with the tombs of the dead, which grew increasingly monumental in the same period. This lecture examines the suburbs of Roman Italy as a historical phenomenon, calling on recent archaeological evidence to reconstruct these neighborhoods, which effectively urbanized the dead and tied them into patterns of daily life. Considering the factors that led to the development of suburbs, I argue that tombs were key; these were not simply passive memorials, but active spaces that both facilitated and furthered the social and economic life of the city.

Allison Emmerson is Associate Professor in the department of Classical Studies at Tulane University. She received her Ph.D. from the University of Cincinnati, specializing in Roman archaeology. She studies cities, and is especially interested in "marginal" areas and activities, like waste management and the treatment of the dead. Her first book, Life and Death in the Roman Suburb, was published by Oxford University Press in 2020, and her articles have appeared in the Journal of Roman Archaeology, American Journal of Archaeology, and Journal of Roman Studies, among others. Her fieldwork focuses in Pompeii, Italy and Isthmia, Greece, and she is currently publishing the results of projects at both sites. She is a Fellow of the American Academy in Rome (FAAR '19) and of the American Council of Learned Societies (F'18)."

Free and open to the public.