A screening of the Oscar-nominated documentary "Attica". 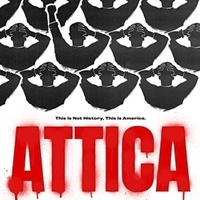 This screening is in conjunction with the visit of Pulitzer Prizer-winner, Heather Ann Thompson and Academy Award-nominated documentary filmmaker Stanley Nelson on Thursday, February 2 at 4:30 PM in Filene Auditorium, Moore Hall.

Stanley Nelson’s latest documentary Attica, for SHOWTIME Documentary Films, was nominated for Best Documentary Feature at the 94th Academy Awards® and earned him the DGA Award for Outstanding Directorial Achievement in Documentary. Heather Ann Thompson is the author of  "Blood in the Water: The Attica Prison Uprising of 1971 and Its Legacy".

Sponsored by the Dean of Faculty, the Departments of African and African American Studies, Film & Media Studies, History, Latin American, Latino, & Caribbean Studies, the Ethics Institute, and The Rockefeller Center.