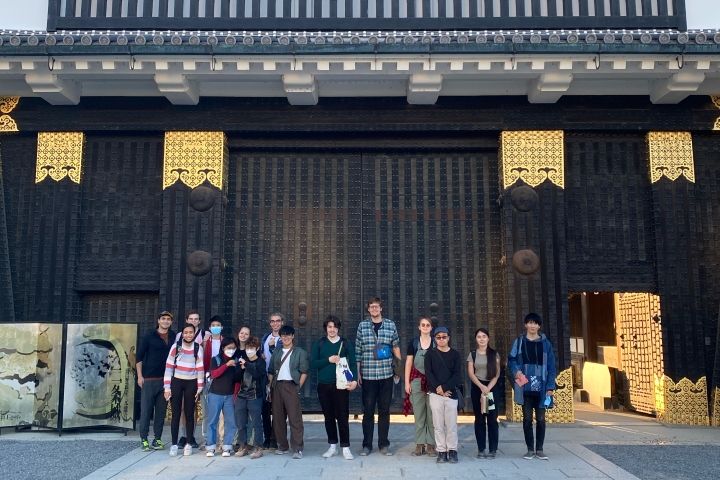 Kjell Ericson ’03, in the plaid shirt at center, leads an LSA class on a field trip this fall. The group was at the entrance gate to Nijo Castle in Kyoto, Japan. (Photo courtesy of Kai Zhou ’24)
Body

For Kjell Ericson ’03, living in and learning about Japan are family traditions.

Both sets of his grandparents were Lutheran missionaries who came to the country in the early 1950s. His parents—Solveig Grønning Ericson, who finished her medical training at Dartmouth Hitchcock Medical Center, and Steven Ericson, an associate professor of history who specializes in the modern transformation of Japan—grew up in Japan and attended an international school together in Kobe. The extended family has earned enough advanced degrees to staff a decent-sized Japanese studies department.

So it seemed natural that in 2000, Kjell Ericson would visit Japan through Dartmouth’s Advanced Language Study Abroad program, or LSA , in which students spend time in countries to learn more about the cultures and languages they’re studying. Today, Ericson is an assistant professor at Kyoto University. In addition to his classes at the university, he is teaching a course on premodern Japanese history to a new generation of Dartmouth’s LSA students, who have returned after a COVID-19 hiatus.

Ericson’s advice for those 14 students exploring Japan, given his personal LSA experience two decades ago?

“It’s absolutely good to try to practice (Japanese) as much as possible and make embarrassing mistakes,” he said. “Because no one, including yourself, will remember those mistakes in the future.”

Beyond improving their language skills, Ericson wants students to get out and experience Japan’s sights and culture. He’s built regular field visits into his course, taking students to archeological and historical sites in Kyoto and Nara, two former capitals of Japan, as well as the city of Osaka, where the LSA program is based.

We’re trying to look at some of the layers and remnants of different parts of Kyoto’s history.

They’ve visited the majestic Osaka Castle, examined materials found in an archeological dig in Nara, and searched for signs of the grid that ancient imperial rulers tried to impose upon Kyoto.

“We’re trying to look at some of the layers and remnants of different parts of Kyoto’s history, and then connecting it to processes that are maybe happening beyond Kyoto as well,” Ericson said.

Ericson grew up in Hanover and the Boston area, but due to his family connections, he’d visited Japan before his LSA program. He returned after college to teach English and interpret for a few years, and then again for a postdoctoral research fellowship, which he interrupted to take a position at Kyoto University.

Ericson typically focuses on modern instead of ancient history, and because of his science background, he covers a lot of academic ground.

One of his upcoming projects, pursued jointly with environmental historian Matthew Booker of North Carolina State University and the National Humanities Center, will examine the trade in live baby ‘seed’ oysters from Northeastern Japan to the North American Pacific Northwest.

“It’s a transpacific history that also closely follows regional histories in both Japan and the United States,” he said. History professor Steven Ericson, at age 2, with his parents and older brother and sister in front of their house in Mihara City around 1955. His parents were Lutheran missionaries in Japan, and all three of their children went on to earn PhDs in Japanese studies. (Photo courtesy of Steven Ericson)

While Ericson likes to get students into the field, he uses classroom time to prepare students for the sites and museums they’ll be visiting.

“I want to actually think about what the significance of these places is and how they relate to what we’ve already seen in other sites,” Ericson said.

Allen Hockley, who is the chair of Dartmouth’s Asian Societies, Cultures, and Languages Program, calls the LSA program “a life-changer for students.”

Students will occupy a different and more connected world than the one he grew up in, Hockley said, and programs like this offer a rare opportunity to learn about different cultures and ways of living, as well as how to fit in to new places.

The Japanese LSA program, which was run this term by Senior Lecturer Ikuko Watanabe Washburn, has changed during the pandemic. The site moved from Tokyo to Osaka, and students no longer live with host families. Instead, they share apartments and dormitories with Japanese students, which Hockley feels integrates them more into the culture.

“It’s just huge to have them with Japanese students their own ages,” he said.

And while normally students would go to Japan after just one year of language study, the COVID backlog means that students with one, two, or three years of Japanese are there together.

One of those students is Michael Bond ’25, who had never been to Japan before. Bond is enjoying the food, and he likes touring Buddhist temples and Shinto shrines more than he expected. He feels the Japanese instruction he got at Dartmouth has been critical to his survival so far, though he still gets stuck sometimes.

“It’s definitely hard to communicate, especially with some random technical terms,” he said in an email. “But I’ve picked up on some of them, like how to ask to pay separately at a restaurant.”

Kai Zhou ’24 has found the Japanese people to be warm and welcoming. Zhou, whose background is Chinese, has been to Japan a few times thanks to his family’s love of Japanese culture.

Zhou says in Japan he can blend in until he begins speaking, which has been both strange and comforting. While growing up Asian in a majority-white community had some challenges, “being in Japan makes me feel more comfortable in my appearance … and my existence as a whole,” Zhou said in an email.

Both Bond and Zhou highly recommend Dartmouth’s LSA programs for students who are interested in languages or studying abroad. Zhou says that it’s easy to develop idealized or oversimplified notions of cultures by studying them from afar.

“You need to visit these countries to even get a chance to understand them,” he said.

The Ericson clan would surely agree. As Steven Ericson said in an email, “It is gratifying that our son Kjell is carrying on the dual family tradition of engagement with Japan.”