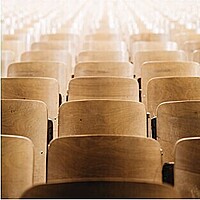 Lecture Info:
At least through the end of the 20th century, American higher education had been the envy of the world:  thousands of colleges and universities, large and small, public and private, served, year in and year out, as conveyer belts to the middle class for millions of students and as drivers of innovation for the American economy. Rapidly rising operating costs, soaring student debt, demographic challenges and growing doubts about the value of college have clouded the picture in the 21st century, leading to a spate of institutional closures and raising fundamental questions about the future of American higher education.

Mark W. Huddleston served as president of the University of New Hampshire from 2007 to 2018, the longest presidential tenure in UNH history. He earlier served as president of Ohio Wesleyan University, dean of the college of Arts & Sciences at the University of Delaware, and as a faculty member at SUNY Buffalo and the University of Delaware. Huddleston received his BA from SUNY Buffalo and his MA and PhD from the University of Wisconsin-Madison, all in Political Science. He has published extensively in the field of public administration, with a particular focus on senior civil servants, and has consulted with US agencies and international organizations, including the World Bank and Organization for Security and Cooperation in Europe, on administrative and financial reforms in the Balkans, Mexico, Southern Africa and Central Asia. A good pilot and a bad golfer, he now spends most of his voluminous free time working with wood and trying to learn to play various stringed instruments. Father of three grown children, Huddleston lives with his wife, Emma, in Vermont and Florida.