Did the System Work? The Fragile State of American Institutions 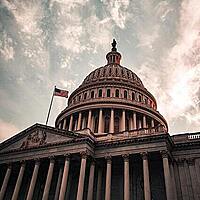 Panel Info:
Large numbers of people do not regard the election of President Biden as legitimate, while the majority who accept or even celebrate him remain worried about the strains on our constitutional system. The question arises, then, whether our 18th century structure worked and if it fulfilled its functions or fell short.

Panelist Bios:
Matthew J. Dickinson is professor of political science at Middlebury College. His blog on presidential power can be found at http://blogs.middlebury.edu/presidentialpower. He is author of Bitter Harvest: FDR, Presidential Power, and the Growth of the Presidential Branch (1999), the co-editor of Guardian of the Presidency: The Legacy of Richard E. Neustadt, and has published numerous articles on the presidency, Congress and the executive branch. His current book manuscript, titled Clerk or Leader? The President and the White House Staff: People, Positions and Processes, 1945-2020, examines the growth of presidential staff in the post–World War II era.

Linda L. Fowler is Professor of Government and Frank J. Reagan Chair in Policy Studies, Emerita, at Dartmouth College where she continues to teach and conduct research. She directed Dartmouth’s Nelson A. Rockefeller Center for Social Sciences from 1995-2004. Previously, she was Professor of Political Science in the Maxwell School at Syracuse University. She holds her B.A from Smith College and her MA and PhD from the University of Rochester.

Fowler specializes in American politics, publishing numerous articles and chapters, two books on congressional elections, Political Ambition: Who Decides to Run for Congress (Yale 1989) and Candidates, Congress and the American Democracy (Michigan, 1993), and a recent study of national security oversight in the Senate, Watchdogs on the Hill: The Decline of Congressional Oversight of U. S. Foreign Relations (Princeton, 2015). Fowler received a Guggenheim Fellowship in 2005-2006 and several awards for her research, as well as awards for undergraduate teaching at Syracuse and Dartmouth. Fowler is a frequent commentator on American politics in various media outlets.

Host Bio:
Jason Barabas ’93 is the Director of the Rockefeller Center for Public Policy and the Social Sciences at Dartmouth College as well as a Professor in the Department of Government. Professor Barabas earned his Ph.D. in Political Science from Northwestern University and his undergraduate degree in Government from Dartmouth. In the years since, he has held postdoctoral fellowships at Harvard and Princeton as well as academic faculty positions in New York, Florida, and Illinois. Currently, Professor Barabas teaches and conducts research on public policy and opinion preferences with an emphasis on empirical methodology and research design.