March's "Conversations on South Asia" event will feature author Kyle Gardner and "The Frontier Complex: Geopolitics and the Making of the India-China Border, 1846–1962." 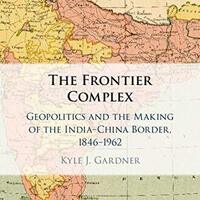 "Kyle J. Gardner reveals the transformation of the historical Himalayan entrepôt of Ladakh into a modern, disputed borderland through an examination of rare British, Indian, Ladakhi, and Kashmiri archival sources. In so doing, he provides both a history of the rise of geopolitics and the first comprehensive history of Ladakh's encounter with the British Empire. He examines how colonial border-making practices transformed geography into a political science and established principles that a network of imperial frontier experts would apply throughout the empire and bequeath to an independent India. Through analyzing the complex of imperial policies and practices, The Frontier Complex reveals how the colonial state transformed, and was transformed by, new ways of conceiving of territory. Yet, despite a century of attempts to craft a suitable border, the British failed. The result is an imperial legacy still playing out across the Himalayas."

Register to attend the webinar: https://dartgo.org/conversations-gardner

The "Conversations on South Asia" series is sponsored by the Bodas Family Academic Programming Fund, the Asian Societies, Cultures, and Languages Program, and the Department of History at Dartmouth College.